Tag Archives: out of the box

I’ve been bombarded with “box” imagery of late.

A friend sent me a poem about personally becoming “unboxed.”

I just listened to a commencement speech urging the graduates to think outside the box.

I recently stumbled across Seth Godin’s Poke the Box. Again.

And I keep seeing boxes of various sorts when I’m talking with people or just listening.

During that commencement speech, one of the examples of “out of the box” thinking and living was Noah in his willingness to buck the culture and endure the ridicule of his contemporaries. I couldn’t help but savor the irony of Noah thinking outside by box by building one very large seaworthy box. It was evidently a box that took him a century to build, a box he lived in for a year.

But then, significantly, after the box had served its purpose by conveying him to a new world, Noah stepped out, walked away, and evidently never looked back. And we’re still looking for that box. Interesting that he didn’t turn that box into his home or into a hotel, a museum, or a temple. He walked away and now we must simply imagine the box.

In another conversation, the image of the Old Testament tabernacle and temple was evoked – and what was tabernacle and temple but a box within a box within a box like the ultimate set of holy Russian nesting dolls? Holy Place, Holy of Holies, and Holy Box of the Covenant. Interestingly enough, God nor heaven was contained in that Holy Box. God said he dwelt above the box. And when God’s presence showed up there in the form of a disorienting, foggy cloud, everyone had to step out of the box. Hmmmm…

And now, it’s the TARDIS.

It took a bit of time, but my daughter has succeeded in sucking me into the world (or worlds) of Doctor Who, though I don’t know if I have yet attained to full official Whovian status.

But if religion is a box, it should be like the TARDIS.

Bigger on the inside. And that’s an understatement.

Not just a thing, a holy relic or museum display, but alive and sentient and mysterious.

And it takes you places – and the real question: is it where you want to go, or is it really where the TARDIS wants to go? Who really is driving the TARDIS?

When you get to where it takes you, you are supposed to step out of the box.

Though archaic in its outer dimensions and clearly out of this world, it blends in anywhere.

And it provides a universal translator.

Now there’s a box I can get into.

Posted by wordhaver on June 8, 2013 in musings, Nature of God, Old Testament, Religion

I need to be in community of some kind, and this is the community I know and am familiar with. But I am keeping my true self hidden for fear of being on the “outs” with nowhere else to go. What kind of community is that? I want the heritage, the security, the belonging – yet I’m secretly resentful that I need to keep so much of myself hidden in exchange for it. If I think about it too much, I realize that I’m trading a life lived out loud for approval and acceptance. That is the issue that won’t go away.

This is one of many responses to a recent post – “Why Do I Keep Believing?” The Biggest Obstacles to Staying Christian – on Peter Enns’ blog.

I like Enns’ blog for the simple reason he wrestles and he makes me wrestle.

In my former churched life I would have stayed away from his blog like the plague (okay, so when I left my former church life it was 1997 and I didn’t even know what a blog was, but that’s beside the point). And I certainly would have stayed away from a post like this that invites people to pour out their doubts, objections and obstacles. Or if I did read the post, I certainly wouldn’t have waded into that pool of swirling, toxic doubt. Surely it would consume or at the very least taint me.

But since it was posted, I’ve carefully read through each posted response, noting the common elements and themes, taking in the stories and emotions, and generally comparing notes.

Funny how we post anonymously before humanity’s critiquing eyes what is laid out on the table of our heart before the Divine that knows and loves.

Little is expressed in these responses that in thirty years of following Christ and pursuing vocational ministry I haven’t seen and felt in myself.
It was actually quite refreshing.

Before, I think I would have screamed, “Stop it or I’ll bury you alive in a box!” At myself as much as at anyone else.

Funny thing is that’s how all of these people posting feel or have felt: buried alive in a box.

I’ve felt that too. Still do at times.

Funny how we like our preachers, our mentors, our holy guides to have struggles…as long as they were all back then. Who doesn’t relish a juicy back story, the powerful testimony of past sins, moral flailings, doubts, searchings – all, now, of course, gloriously overcome and behind us. But present doubts? Present fears? Present suffocations? Not so much. For the most part acknowledging present suffocations leads to early terminations.

Do you suppose the very fact that we can’t and don’t openly acknowledge the struggle and allow others to do the same is what makes it all a box in the first place?

Why is it that we ignore the namesake of the entire Old Testament narrative? Israel. The holy narcissistic scoundrel who spent all night literally wrestling with God until he got a blessing (and a new name…and a new limp). Israel. He who wrestles with God and prevails and lives to tell the tale.

Why is it that instead of wrestling we are more interested in telling each other to lie down or line up?

As Enns states at the end of his post, “For those on the Christian path, looking into the dark places, honestly and courageously, is part of the deal (see Psalms or Ecclesiastes).” 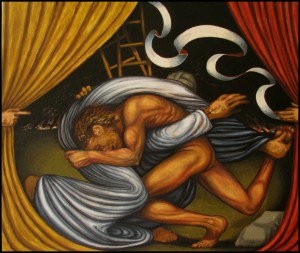 What if instead of being religious societies of anonymous posters/posers quietly writhing and wrestling in our boxes we became open, blank-making communities of fearlessly self-confessed wrestlers with God?

Dare I say it?

Dare any of us say with Sister Aloysius in the final line of Doubt:

“I have doubts. I have such doubts.”

What remarkable faith might we find in choosing the wrestling of faith that embraces its (and others’) doubt?

What deepening wonder me might discover in resisting all supposed or suggested easy religious or irreligious three count pins? (After all, it’s not like the religious have cornered the market on pat answers to fill in life’s blanks or in demanding that we lie down or line up!)

What might we discover if we embraced the tension in the prayer, “I believe, help my unbelief,” rather than whitewashing over it with strident religious or irreligious assertions, suppressing the doubts that arise because we are living, growing human beings?

What might happen if we accepted that we are all Jacobs wrestling with God and life and truth, and that that’s what we are supposed to be doing? And what joy could it unleash if we actually caught a glimpse of a Jacob-wrestling God who isn’t scandalized by our questions and wrestling, but who loves it?