One of my favorite Robert E. Lee stories. After the war…from Lee: The Last Years by Charles Bracelen Flood: 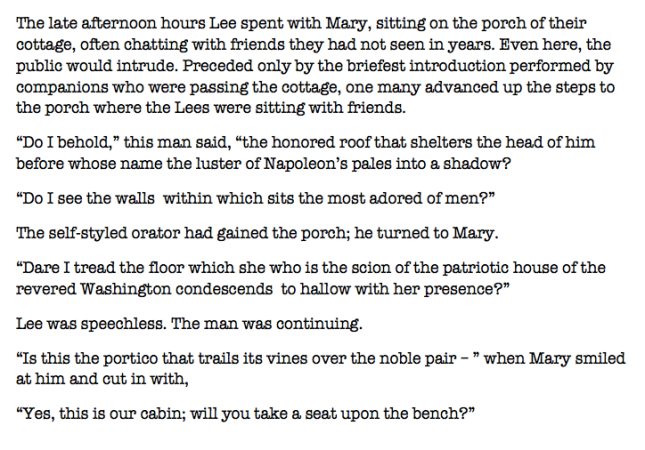 What self-styled orators we all can be when it comes to God.
When we come to God.

Such flourishes.
So many words as we gain the porch,
or perhaps hoping through our eloquence
to gain access to the porch?

How often, I wonder, do we leave Abba speechless
as we seek to impress him as we ascend;
God speechless,
we continuing;
how often the Spirit waits for us to pause,
to take a breath,
so she can invite us to have a seat
and enjoy some lemonade in the cool of the evening… 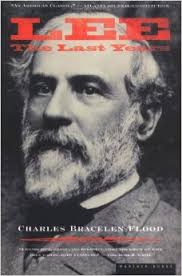 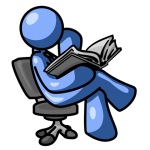 Posted by wordhaver on November 24, 2014 in Books, Quotations

I tried to reaching out to him again.

Estranged brother of mine.

My brother lost his only son two years ago.

I offered to be on the next plane and bring the whole family. He said, “No, don’t come now. And when it’s time I just want it to be you. Can’t handle more than you.” It was a hard trip and weekend when time for the funeral came. What words are there for such a time?

Flying home after the funeral, I tried connecting by phone each month. Hard calls, each one. Processing uncontainable grief over the phone. I felt helpless, impotent, distant. His anger starting flaring at me for not calling enough, not doing enough. We’ve never had a highly functional relationship, he and I. Periodic calls discussing movies and favorite shows, but rarely going to deeper places. Now he was needing more, and I frankly didn’t know how to give it. After he vented at me I started calling weekly. He almost seemed annoyed. Then he stopped answering my calls or responding to  voicemails when he wouldn’t answer. Then a midst other plot complications, he cut me off in an email. “You are cruel. Do not call or write.” Meanwhile, unbeknownst to me, I was rapidly descending into my own journey with cancer and chemo. I needed a brother myself and could not look there. An “adopted” brother and several “adopted” sisters became family on a whole new level of experience for me.

I made the journey, but not alone.

Cancer and chemo are the ultimate detoxifier of personal and relational BS. So I have found. So being done with chemo (though it is still clearly not done with me!), I reached out to my estranged brother. And after a brief email exchange, he laid a litany of charges of neglect on my part that seem to be insurmountable in his eyes, but he wished me peace and happiness in my journey.

A new word to etch over “You are cruel. Do not call or write.” If I choose to.

I thought briefly of producing my own litany of charges to demonstrate just how dysfunctional this relationship has been. I could have started at age five – one my earliest memories. Crying out in pain with him covering my mouth so mom wouldn’t hear. I could see her in the other room, but his hand stayed clamped over my mouth. She never heard. I could track forward five more years to when he watched his friends beat me up and did nothing to intervene. Okay, I had asked for it by slugging one of his tough friends’ arm after being told not to because he had just gotten a shot (I have always been a bit of a brat – those who really know me know that). But still, he watched.

Then I could track forward to when my daughter was fighting for her life on an operating table with brain surgery. He didn’t come, as he said a true brother would do. He sent ice cream. And he chewed me out for not calling him frequently enough with updates.

Yeah, I can produce a litany of my own. But these are my eyes, and he has his own. His eyes see and weave a radically different tale. And to what end my own litany? To add more to his own load of grief to which I have evidently already made plenty of inadvertent deposits? Would it be to find a new beginning? Or merely an effort to “set the record straight,” to justify myself and let him take the stand to respond to my charges?

I opted to simply take the word “peace.”

My last words to him in reply? “And to you.”

And I saw Galeed.

Galeed is the “heap of witness” – the pile of rocks that Jacob and Laban made to mark the resolution of their own terribly dysfunctional relationship after accusations and counter accusations flew like solid shot from the cannons of opposing forts. There was little they could agree on as they rehearsed their own litanies. Finally they agreed that they at least could make a pile of rocks together and they agreed on a name for the pile – though they named it in their own languages (Hebrew and Aramaic). It was a heap of witness that God was watching between the two of them (and would ultimately be the judge of their dispute) – and that neither would pass that heap of stones to do any harm to the other.

Sometimes, this is the best we will find in our broken relationships. Sometimes. And it is good. Not optimal. Not even all we could hope for. Limited. But still good. A pile that enabled both to return home and move on with life.

Much reconciliation will be left for other shores.

The sooner we come to grips with that and build our mutual Galeed (if we are so fortunate to have a mutual Galeed – sometimes we just have to build it by ourselves), the sooner we can be freed from our own internally rehearsed toxic litanies and solid shot, and truly move on. 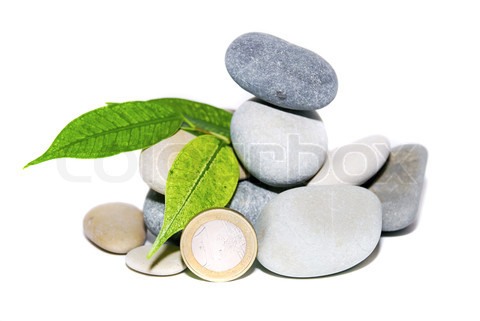 Posted by wordhaver on November 3, 2012 in musings